Which Superhero can you relate to?

Nearly every superhero has a difficult beginning in life before they become a success. It is one reason we can adhere ourselves to these fictional characters because we too suffer many setbacks before we realise our full potential. Very few people are lucky enough to go through life with little difficulty, we all suffer at some sort of level for different things and at different levels of difficulty.

In this blog post, we discuss superhero characters and how we can relate their stories to our own lives to help us find the strength to move forward and take elements of their characters into our own psyche.

The path of most superheroes 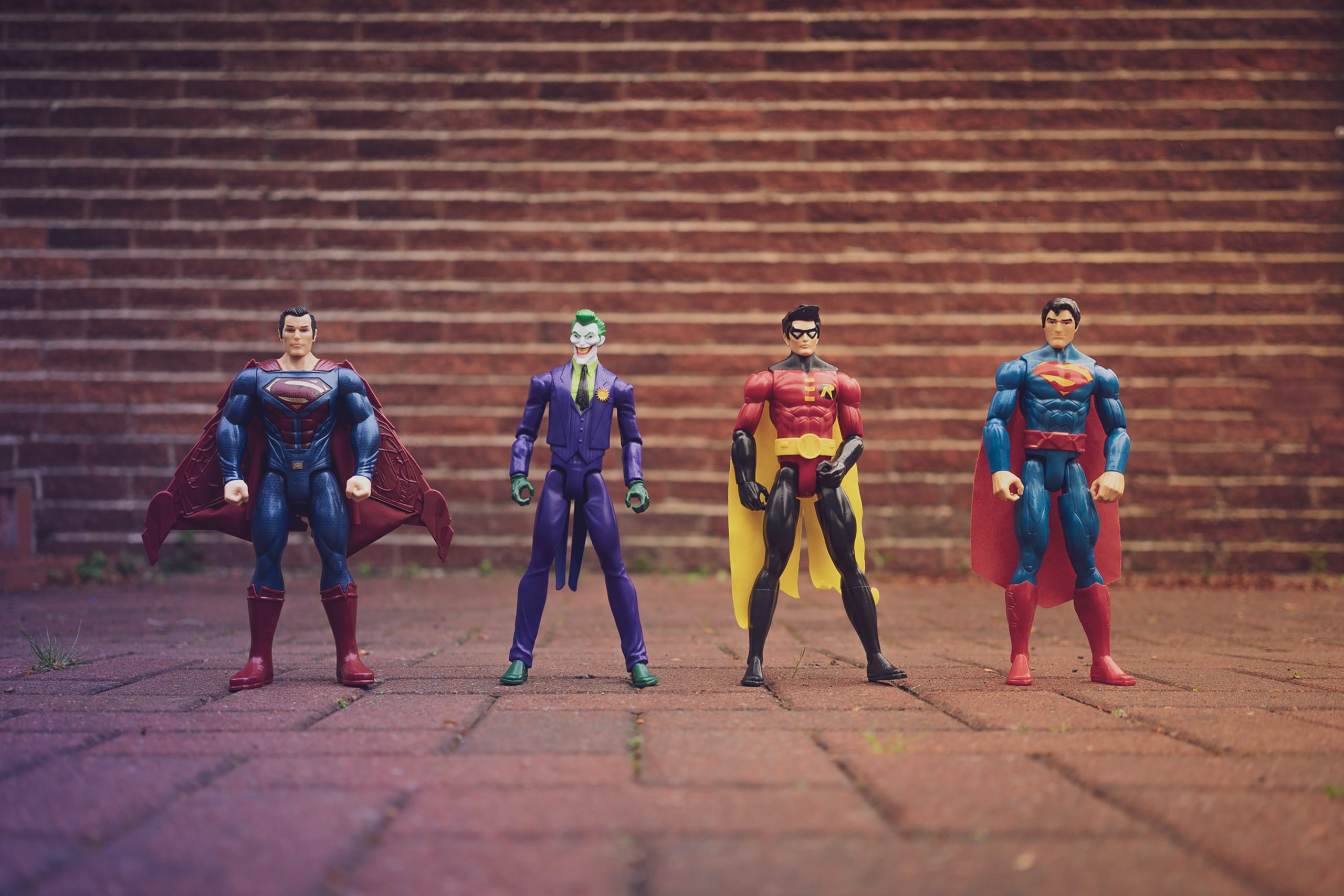 As already mentioned, before heroes become super they usually endure something terrible in their younger lives or a freak accident that happened to them that changed them forever.

For many of them it is an extremely painful experience what they have had to go through, for example, Batman saw his parents killed by two thieves right in front of his eyes leaving him an affluent orphan in the streets of Gotham.

Rocky, a man with no qualifications or particular skill so had little opportunity of making much of his life must have had low self-esteem until he was given an opportunity, by freak chance, to box the champion.

Every superhero was once ‘down on his or her luck’ but by being down on their luck it made them look inward rather than outward, began to work on their weaknesses and become stronger, harnessing any past pain for the good people in the world. Even if a hero does come across a villain it is rare they want to kill them or seek revenge, they just want to protect others from hurt.

How does this relate to improved mental health?

Going through a mental health challenge is incredibly difficult. There is a stigma attached to mental health that you are ‘crazy’ or ‘to be wary of’ and you already feel terrible because of what your condition symptoms are doing to you.

It feels like the entire world is against you but all you want is to feel normal and content again but once you have been touched by mental illness it is in my belief that you never return to ‘the old normal way’ of being, you simply learn to cope with the feelings inside and if you learn coping strategies, just like the superheroes in the storybooks, you too do become stronger and end up with your very own superpowers with even the possibility of helping and protect other vulnerable people.

Borrow the characteristics of your favourite superhero.

One of the techniques and strategies the founder of BoM used when he was severely ill but needed to find strength was to imagine that he had the characteristics of one of his favourite heroes, imagine what he would do in a similar situation, and try to act upon those thoughts.

It may seem a strange concept but imagine it like acting in your own private theatre of the mind. No one knows what you are thinking but you can imagine yourself in complete costume, with his or her character, and find the strength to move forward.

Which Superhero can you relate to?

Usually, what helps is finding a hero that you connect to, someone with a similar story or character to your own that resonates with you emotionally and you recognise you need that strength in your own daily life.

Sent to earth to save his life from being murdered he was an alien although looked very similar to us and found by two country folk, raised as their own child as Clark Kent. Clark knew he was different from a young age never quite fitting in but with incredible abilities in speed, strength, hearing, and vision. Clark was raised by moral people who taught him the importance of using his powers only for good and to conceal them because people will be afraid of his differences. This excluded him from having friends until eventually, he began to find his powers useful, and with the combination of his moral lessons from his parents and his unique abilities he started to look after the vulnerable. Superman is a great character for those who want to help people, feel like they are so different to everyone else, often feeling excluded but still wants everyone to be okay regardless of who they are.

A very intelligent scientist that developed a machine that turned him into a very very angry man! We all get angry but some can’t control the amount of anger we feel and turns into a rage so much rage that it gives us incredible strength and we feel no pain but as long as you don’t let the rage take over you turn the feelings of anger into motivational energy to make a positive difference in your life. This character is good for those who have anger issues to realise that if they breathe correctly when angry and harness the energy you can use it to motivate yourself into a better situation, for example, using it to exercise, to learn new skills or to push yourself into a better life.

Spiderman’s grandfather was killed at a young age, and only looked after by his grandmother as he was growing up as a teen, his family life would have been very confusing and then a mutated spider goes and bites him to put an extra spanner in the works. He gains new abilities through his freak accident to be able to act as a spider with fast reflexes, ability to climb walls and shoot cobwebs. He has a girlfriend who he can never tell of who he truly is, a little bit like people who have mental illnesses but try to conceal it for fear of it getting out. Spiderman always tries to use his new skills for the betterment of others but occasionally does feel that maybe he could use the skills for his own gain when he confronts his alter ego. This character is great for those who struggle with letting people know about their problem and try to deal with it alone.

After watching his parents get gunned down during a mugging in Gotham City as a kid, millionaire Bruce Wayne dedicates himself to becoming the world’s greatest weapon against crime as Batman. The darkness of his personal PTSD that Batman would have had to deal with as a child and use it the pain in a good way must have been challenging to control but the fortunate part of Bruce Wayne’s life was the fortune that was left behind from his parents. Batman is a great character for those who have experienced a great loss that was out of their control and wants to connect to the idea of protecting people from also experiencing traumatic events such as he had. For those who are not of an affluent background, it may prove a little difficult to relate to him over other superheroes created.

A General who became a slave, a slave who became a Gladiator, a Gladiator who defied an empire. Quite a story don’t you think? This fictional gladiator had everything and was about to gain yet more power and strength when it was taken away from him due to the jealously of Ceaser’s son. He lost his family to murder, his career ended, his wealth and his freedom destroyed, he literally had nothing but he chose to keep fighting! He knew what the real emperor’s wishes were before the son took rule and he wanted to fulfill them wishes before he saw his family again in the afterlife so endured the pain, humiliation, and suffering that endured after his tragic experience. This hero is a fantastic character to be inspired by for those who have lost everything due to no circumstance of their own, those who had great opportunity taken away from them but uses their pain to always try to do the right thing.

The Spartans knew the odds were stacked against them but they held strong against the incredible odds that faced them. They had trained their minds so much and learned strategies and techniques of incredible fighting ability, it is believed they destroyed wave after wave of Persian soldiers because they had taught themselves so many abilities to overcome adversity.

These heroes are a great inspiration for those who know to become stronger they need to train and train hard find strategies and develop themselves to become incredibly strong and almost unbreakable.

Ridiculed for being different to everyone else they were cast away to feel like they should be ashamed of who they are when in fact their innate abilities made them special and able to help humanity in new and incredible ways if they weren’t shunned away. The x-men are great characters to aspire to be like for those who have encountered mental health stigma from others or been bullied for being intelligent or different from the norm.

Frodo, always a jolly happy person, given the burden of one of the most powerful items in his world, the master ring ( a symbol of master knowledge and power ). The ring is so powerful that it consumes so many that it required a pure good heart to be able to carry its burden back to Mordor and destroy it forever.

Frodo may seem small, timid, and weak but really he holds deep courage, strength, and boldness to take a long journey and to keep going even though he is afraid. This character is great for those who fear, have anxiety problems to realize that eventually, the darkness in your life will be destroyed as long as you keep going.

Use your pain to amplify your strengths

We all go through trials and tribulations in life but we can either let them destroy us or we can harness the pain and make us stronger. The pain may never go away fully but by using it as energy to motivate you into a better life, focusing on your main skills, advancing them, and pushing yourself forward you can become your very own superhero!

Let your difficult past become your fuel, not your end.

Which superhero can you relate to?

If you like you can take this fun quiz to see which superhero your personality matches best.