How Do We Help More Men Talk About Their Feelings?

Men, those who struggle with expressing their feelings openly for fear of ridicule. For fear of appearing weak, their sexuality being brought into question or seen as a moaner. How do we break these stereotypes and help more men talk about their feelings. We need to show that the truely strong people are not the ones who keep quiet. The ones that speak out are the ones who are strong by acknowledging something isn’t right. In this article John, founder of Seek A Therapy, discusses what he believes could help.

To Help More Men Talk About Their Feelings Is Hard. Is Society & Marketing To Blame ?

When growing up as a young boy a lot of our toys tend to be non conducive to expressing feeling. Super hero toys, army soldiers, scaletrix and a football were my main toys. All of these lead towards power, a competitive nature and being the best or alpha male.

Girls toys, on the other hand, tend to help develop care, compassion and emotion. Looking after dolls, dressing barbie dolls and making sure their hair is nice. Expressing themselves through dancing, singing and art is also often encouraged.

There has been a definite distinction between how markets and society has deemed how both boys and girls should act.

Pink and blue. One or the other. Black or white. It can causes problems for a lot of people to express themselves as children become young adults with strong definitions of what they think is expected of them.

As  boys move into puberty and they become aware of the opposite sex they become MORE competitive. As well as competing for the highest grades at school the male characteristics of being strong and ‘the best’ is further enhanced. Boys with the highest grades feel great and the ones who fail, well they feel inadequate. Often they hide their dissatisfaction through jokes and push their sadness down and hide it away, a trait for many male teenagers as they move into adulthood.

As we progress from school to the work environment it could be said that a lot of us have well and truly been conditioned. We have learnt how we should be in order to be ‘accepted’ within society.

Every male, whether they like to admit it or not, want to be a superhero.

Why is James Bond such a  successful brand?  Superhero‘s don’t add pressure to the people they are meant to save he just makes their life better. He is swarve, charming, strong and wealthy.

James Bond is everything that is wrong with society’s perception of the modern man. Having all the material wealth, confidence, the women, the job and the strength. Never one to break under pressure, even if tortured, that is what a great man should be?

Even the music industry portrays the stereotypical man with lyrics like

Before Seek A Therapy, We Were IT Called Battle Of Mind. Here Was Our 1st Week Launch Demographic Insight

We promoted the new website on Facebook in the hope of reaching out to people that need help, guidance and lifting up.  We advertised for a week and discovered something very, very interesting.

Is this symbolic of the world’s men in society and their struggling in silence. Hiding emotional and mental pain in fear of ridicule, inadequacy or juxtaposition of what a man ‘should be’ in the eyes of society. Alternatively, its possible to suggest that maybe men just don’t see this kind of thing as beneficial to their lives?

It was in our belief that it was concerning that the page likes aren’t more well balanced in gender ( but thank you to everyone who has liked it, I hope you are benefiting from it so far! ). I will continue to promote mental wellbeing for all but we really need a focus to do something to help more men.

We must stop the embarrassment that comes with the nature of speaking out. It is difficult for either gender but even more difficult for men. They are more conditioned to keep quiet about difficult emotion. Whether stress, emotion based or trauma more must be done to change men’s way of thinking that suffering alone is more ‘manly’ and shows strength.

So How Do We Help More Men Talk About Their Feelings 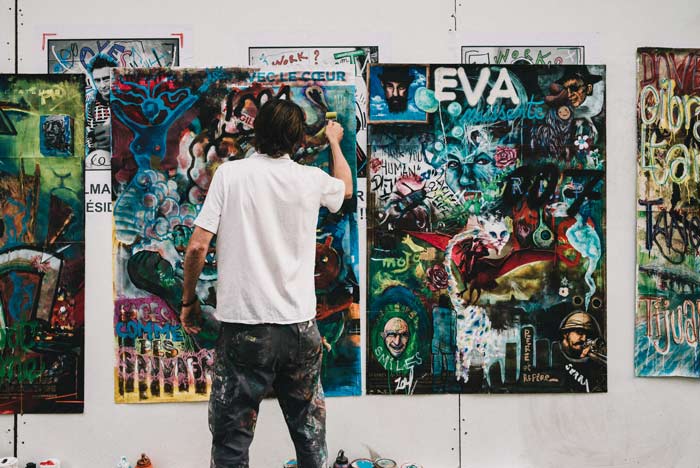 A difficult question with no straightforward answer.

As a man, the founder’s opinion of what could help men reach out more is the following : –

I believe what has helped me talk about how I have coped with my personal challenges and difficulties really is my education. I have had a keen interest in deep thinking and creativity so being outspoken and expressive is in my nature. Not only this, but having a family with similar open views helped.

The Arts, The Key To Unlock Suffering?

In terms of art John, the founder of SAT, was taught to observe the world in an alternative fashion developing concepts and philosophies of the world around me that someone else may not think about. It doesn’t matter what art you study you are unleashing your emotions on canvas. A musical instrument or through dance, it is ALL liberating.

He knows he was very fortunate, he came from a very good home (which he left when he was 21 ). It was probably down to his family background why he still around to try and help others.

When John had his breakdown he didn’t say anything till he was at breaking point. Burdening his family with more worries than they already had to deal with was not on his agenda. He was trying to ‘stay strong’ for them and his ex partner ( although she wasn’t so supportive of him whilst he became ill, thus why she is an ex).

Speaking out earlier about his feelings may have stopped things getting as bad as they did.

He may have been able to avoid his breakdown.

Like most men do, he kept all my problems within. He took the world upon his shoulders but the world became too heavy.

Men need to speak more openly and be encouraged and lighten the load. To know things can get better and that your feelings matter just as much as anyone else. Let us help more men talk about their feelings.

What else do you think we can do to make men speak out about mental health? What can we do to make it more attractive for good mental wellbeing?